The upcoming Android faction in System Siege has a unique set of units and buildings. One of these buildings is the data centre, which acts as a headquarter for the Androids. This post will cover the creation and animation of the Android data centre.

When designing the Data Centre, it was important to incorporate the design elements that had been used for the Android faction. Similar design elements and colour pallets can be found in the below sketch of an Android commander: here. 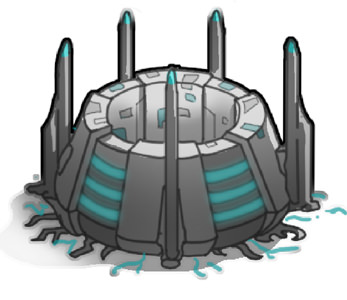 After choosing a design, the next few steps involve cleaning up the linework, adding colour and adding lighting. Also, the perspective of the building is slightly tweaked to fit with the rest of the in-game assets:

Although subtle, there are several animations added to the finished data center. In the below image, one can see the inclusion of pulsating lights and particles.

When combining all these elements together, the Android Data Centre is complete:

To see more buildings and assets, check out some in game footage on our Youtube Channel or watch live on Twitch!