The first map of System Siege is a large temperate island on the planet Atra. The island acts as a hub for the initial campaign missions and tutorials. This post will cover the creation of the island from a sketch to an animated map.

The process begins with a rough sketch of the map. This sketch’s main goals is to plan the shoreline and the placement of mountains and forests: 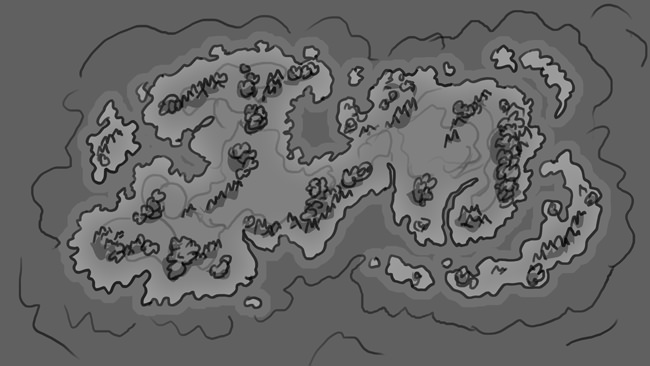 With a rough map of the island completed, the next step is fleshing out the different terrain areas. Elements such as grass, coastline, forest and desert areas are placed as flat colours. The elevation of the island is represented by layering darker shades of blue to create the illusion that the island recesses into the surrounding ocean. Once the above elements are in place, textures are added to each terrain type:

Next, the map is populated with forests, mountains and additional textures to the land. These elements are placed strategically to leave room for campaign markers.

To avoid the static and rigid look of the surrounding ocean, the water portion of the map is softened and slightly warped to appear more ‘water-like.’ Although subtle, the animated water is used to breath a bit of life into a mostly static map.

Finally, the land portion is placed over the animated water and, along with several additional details, the map is complete:

Check out some in game footage on our Youtube Channel or watch live on Twitch!